How to refactor/rename a variable name in a function efficiently

As we dicussed in Emacs community at Google+. Although multiple-cursor is good for this task, I cannot use it because it conflicts with my favourite evil-mode (Vim simulation in Emacs).

Though iedit is good, there is still room for improvement. When using iedit-mode-toggle-on-function, we need press key twice to rename the variable name. Once to enable it, twice to disable it.

Magnar Sveen pointed out in the G+ discussion that the key point we need plugins like multiple-cursor or iedit-mode is that we can see all the changes while doing the editing.

This reminds me that evil-mode has a excellent regex string replacing mode which also show the changes when you are typing EACH character of new string.

So by using evil-mode's default regex replacing command, I can implement similar feature even more efficiently then iedit-mode!

Here is my elisp code:

Put you cursor above a symbol/variable and press hot key "Ctrl-c ; s", then the regex to replace that symbol is automatically created and inserted into mini-buffer. Now you only need type new string and watch.

This is the screen shot (I renamed variable "count" into "cnt" in C++ function hello): 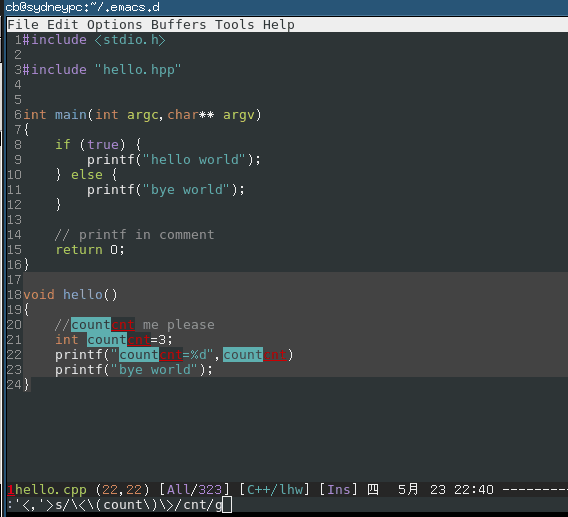